Colours and designs at the market

At the Benito Juárez market in Oaxaca you can buy everything from Chapulines and Mezcal to hats, shoes and crafts.

Hear Rosa from Teotitlán del Valle tell about the traditional designs and colours made from vegetable dye and hear about how she spends her time when there are no customers.

Vegetable dye and the Cochineal bug

From the Cochineal bug you obtain a beautiful red color that is highly popular. The bugs 'grow' on the Nopal Cactus and are harvested through an elaborate process and was called "Oaxaca's Red Gold". It was an important source of income for New World and was exported worldwide to countries in both Europe and Asia. 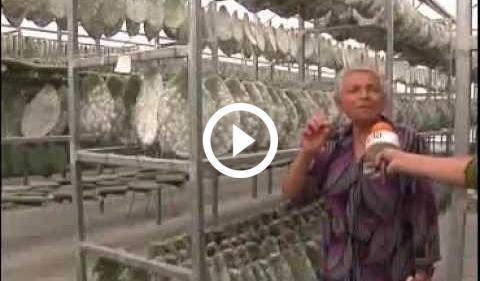 Teotitlán del Valle is known for their beautiful natural colours and designs. See also the video on the next page: Cada familia tiene su estilo.

You use the plants that grow in the region to dye, so in Chiapas for instance, they use other vegetable dyes to obtain the colour. See also the chapters on Carlos Reyes and his project:

Or hear the young weaver Petrona Patishtón tell about her work and knowledge of vegetable dyes in Petrona de San Juan Chamula.

El Mercado Benito Juárez is named after Benito Pablo Juárez who came from a Zapotec family. He was the president of Mexico (1855-64 and 1867- 72) and by many Mexicans he is considered to be one of Mexico's most popular leaders.

By using this website, you agree to the use of cookies to give you the best user experience.
Find additional information at CookiesOk